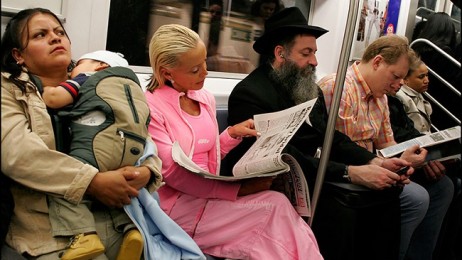 I love New York City trains. Riding the subway is always on my “to do list” when I visit the city. The people are amazing. Going about their personal business, passengers see people around them without being intrusive. While the locals mind their own business, I never have difficulty finding someone to help me get on the train I should really be on.

The trains are rich with characters. Humans. Their stories evident in clothes, carried treasures, and interactions with their companions or gadgets.

I wrote a blog on Childswork/Childsplay about a boy who sat beside me on an afternoon train. He was treasuring a plateful of croissants stuffed with meat that his mother had made. It was obvious that he adored his mother who had prepared the food to deliver to someone else.

I was most impressed that his respect for his parent had not been tainted by a society that tears down rather than supports parents. For that matter, by a society that treasures materialism rather than the homemade part of life. He could clearly see his mother’s thoughtfulness, creativity, and honest work. She was embarrassed that I had “seen” her. I wish she had known that what I saw and admired was her love and attunement with her son and with the people she was about to serve with her food.

I wish for myself and others the child’s eyes so that I/we have appreciation and adoration for the simple goodness in people.